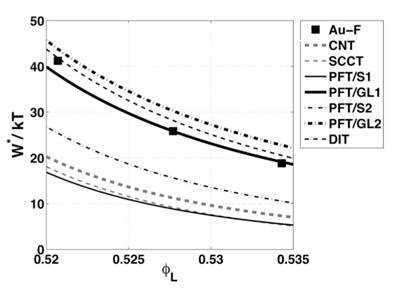 The hard-sphere system is the best known fluid that crystallizes: the solid-liquid interfacial free energy, the equations of state, and the height of the nucleation barrier are known accurately, offering a unique possibility for a quantitative validation of nucleation theories. A recent significant downward revision of the interfacial free energy from 0.61kT/s^2 to 0.56 kT/s^2 [Davidchack, R.; Morris, J. R.; Laird, B. B. J. Chem. Phys. 125, 094710 (2006)] necessitates a re-evaluation of theoretical approaches to crystal nucleation. This has been carried out for the droplet model of the classical nucleation theory (CNT), the self-consistent classical theory (SCCT), a phenomenological diffuse interface theory (DIT), and single- and two-field variants of the phase field theory that rely on either the usual double-well and interpolation functions (PFT/S1 and PFT/S2, respectively) or on a Ginzburg-Landau expanded free energy that reflects the crystal symmetries (PFT/GL1 and PFT/GL2). We find that the PFT/GL1, PFT/GL2, and DIT models predict fairly accurately the height of the nucleation barrier known from Monte Carlo simulations in the volume fraction range of 0.52 < f < 0.54, whereas the CNT, SCCT, PFT/S1, and PFT/S2 models underestimate it significantly.
Journal of Physical Chemistry B - Condensed Matter Materials Surfaces Interfaces and Biophysical 113, 5141-5148, (2009)
Download preprint